1) Talent. This is well covered by the current players, you won’t see a regular tour player losing to a state champion or top regional talent.

2) Equipment and a reasonable cost to stream video. This can be covered with tools like OBS Studio and Facebook & YouTube, and the best cameras, audio mixers, and announcers that you can afford.

3) Audience. Capturing and growing the audience needs to be one of the top two priorities for anyone broadcasting racquetball, whether they be the IRT, the WRT, the LPRT, USA Racquetball, or the IRF.

4) Advertisers. Also known as sponsors, it is imperative that any broadcaster have the advertising sales that they need to keep their equipment up to date, announcers paid on time, and players making enough money to keep attending events. As I am not a sales person, I will not be offering advice on how to sell the broadcast racquetball matches to advertisers, aside from putting the emphasis back on growing the audience so that you have an audience to sell, not a specific sport or specific players.

With these starting thoughts above, I did some quick brainstorming on how I would take action to grow the audience for live streaming of racquetball in the specific situation that the event is a repeat (i.e. the third year in a row for the event in South Carolina in January for the LPRT, for example).

Things to do to promote a tour stop and build an audience for the live broadcast:

1) Since the event is a repeat of a successful past event at the same location, use that existing footage (i.e. your existing assets) to build the audience going into the event.

1A) At the time of your first expected broadcast, 3 weeks prior to that broadcast, re-share or re-stream the best quarterfinal match from last years event.

1B) At the time of your first expected broadcast, 2 weeks prior to that broadcast, re-share or re-stream the best semifinal match from last years event.

1C) At the time of your first expected broadcast, 1 week prior to that broadcast, re-share or re-stream the finals match from last years event.

1D) Prep your message about the event with these streams, stating clearly exactly where, when, and how this years event will take place and how interested individuals can watch it.

1E) Only 3 weekends between events? Show the semi-finals and finals matches from the year before. Only 1 weekend between events? Restream the prior year’s finals. Back to back broadcast weekends? Keep the audience informed.

3) Draw on the social media presence of your players for the upcoming event. In each of the streams above, tag both the players playing and the top ~8 registered players from the event this year. (Consider additional tags based on the players with the largest social media followings.)

4) Because the ‘Pages’ feature is devalued in the Facebook timeline, make the most of your investors, employees, advertisers, and players personal accounts. Inform them of the schedule of the review streams (and the new live event) and ask them to share those streams as soon as they go live. In the case of someone like USA Racquetball, every board of directors member from every associated state organization should be on the same page with you, so you should have 100+ shares just from this group of players that are invested in the growth of the game.

5) Be clear in your announcements. 75% of the US, Canada, and Mexico viewers are likely to not be in the same time zone as the event. Keep that time zone listed with all broadcast time announcements.

6) Stop relying on R2Sports as your match time announcer. Yes, the brackets have all of the details, but don’t make your audience consult a different source to understand what you are doing and when you are doing it.

Additional pet peeve to fix re:YouTube – Get the titles of your matches right, provide full details of the players and the round of the tournament that the video is from. Treat these as an asset! The YouTube matches look like thrown away garbage at this point. Compare the title and description to Daily Racquetball’s comment on this match as an example: 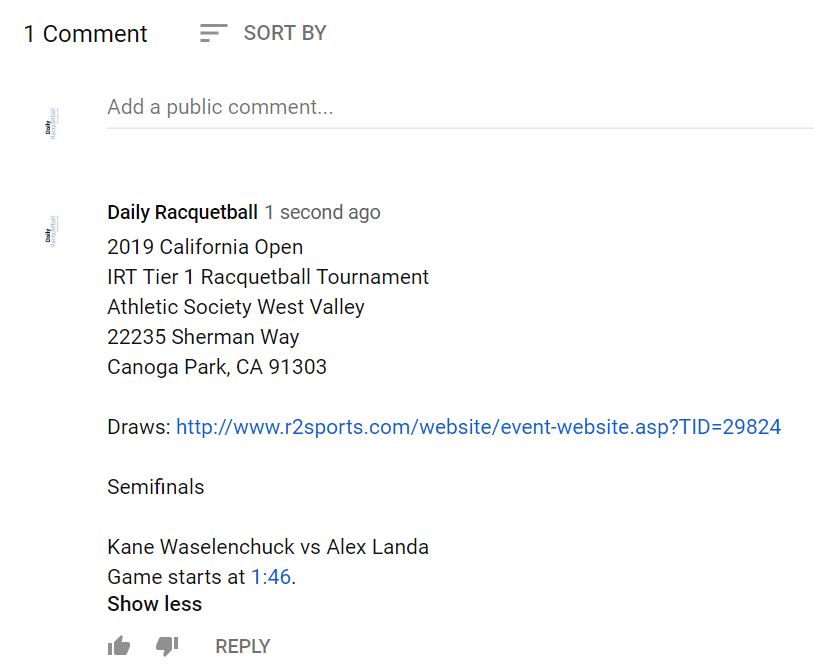